Are your pet’s microchip details up to date?

Because it’s nearly Christmas, and a time when families are often reunited with their loved ones, I thought it would be the perfect opportunity to share the bittersweet story of one of my patients: Leo the very lucky stray cat. 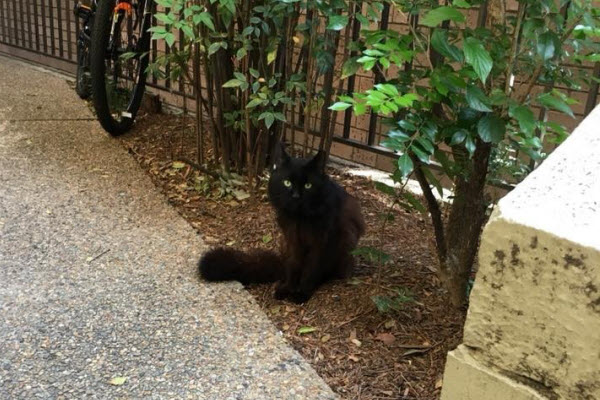 So why is Leo so lucky?

Well, when a stranger called Sue noticed Leo living in the surrounds of her apartment block she thought he was a stray.

So for the past 2 years or so she’s been very kindly looking after Leo, making sure he was okay, fed and watered.

But that’s not the only reason why Leo is a very lucky stray cat.

Sue called me out last month to check on Leo because she was concerned he wasn’t looking his usual glossy self, and so we did the consultation on the outdoor steps with Leo in her arms.

Because Leo was a stray I decided to try to scan him while I was there to see if I could locate a microchip.

And within just a few minutes I had Leo’s original owner on the phone.

So How Had Leo Became Separated from His Family?

A couple of years ago Leo’s family had moved from near this block of apartments to a new home, but because cats can be very territorial Leo had kept running back to where he had originally lived.

Leo’s family had managed to find him and bring him home several times, however the last time he’d escaped they couldn’t locate him and Leo just didn’t come back.

But because Leo’s family had kept his microchip details up-to-date when they moved, I was able to contact his family as soon as I’d scanned Leo. And they were so relieved to know that Leo had been finally located and was alive and well.

Sadly for Leo’s original family, they were just about to move overseas when I contacted them and so they couldn’t take Leo with them at this stage. But they wanted to see Leo again before they left, and so they came around to meet Sue and Leo for both a reunion and farewell.

They were so grateful for the chance to see Leo again, as well as to meet and thank such a dedicated and lovely person as Sue, who had cared for Leo for all of these years.

By calling me out for a consultation, Sue had also given Leo’s family the reassurance of knowing their beloved pet was still alive, as well as giving them the chance to say goodbye to him before they moved overseas.

And so even though Leo’s story is bittersweet, at least there was a resolution thanks to the updated microchip.

The photo below is of Leo and his new mum, Sue. Now that Leo’s original family are unable to take him overseas, Sue has officially become Leo’s new owner, and Leo couldn’t be happier.

Leo is indeed a very lucky stray cat, not only because he was fortunate enough to be cared for by someone as kind as Sue…

…but because his original owners had updated his microchip details. So they were able to leave for overseas in the knowledge that Leo was alive and well, and happily living with his new owner Sue.

Sadly, not all stray pets end up as lucky as Leo.

If you’re not sure whether your pet’s microchip has been updated, contact your mobile vet and we can scan your pet for you next time you visit.

There are so many microchips that aren’t updated when people move so please ensure you do this as a priority, because your loved ones deserve a happy ending to their story too.