A vet’s bittersweet home visit – the importance of microchipping 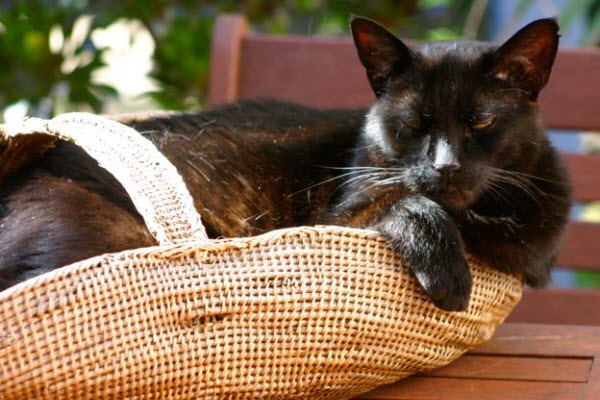 One person’s sadness becomes one person’s joy! Little “BB” was finally reunited with her owner, Scott, who had thought that his cat had died a year earlier when she had gone missing.

“BB” was the name given by her adoptive mum Libby after she had started hanging around outside Libby and her partner’s apartment. BB stood for Black Beauty. Soon she became a fixture and the three had become a small family – well not that small as there was already a Dragon lizard and a lorikeet in residence!

“BB” was very thin on arrival but slowly after having been given some love and nurturing (and a fair amount of food!) plumped up and returned to good health with her beautiful shiny black coat.

She loved sleeping on the bed but still liked to spend a lot of her time outside, though not straying too far from her new home.

Libby decided that it was time she had a vet check and although she knew this would include looking for a microchip she was inwardly hoping that there wasn’t one as she had become quite attached.

Libby found my mobile vet service and requested a house call. She explained to me the background on the phone and I looked forward to meeting BB, hoping to give her a clean bill of health.

On arrival I was introduced to the whole family except BB, who was hiding under the couch!

Eventually she ventured out allowing some nice pats and even letting me put her in my lap. She certainly had a black and beautiful coat and didn’t look anything like the stray that was originally described.

Needless to say, she did in fact have a microchip and through the Pet Find Line we were able to track down her owner who was elated at the discovery. Tears welled in Libby’s eyes and she was obviously very disappointed. It was indeed very sad and a strange kind of mood filled the room.

Though certainly not black and white, we all thought it was the right thing to do. We were all very happy that BB was going home but the mood was sombre. BB was such a cute and sweet little cat who had become accustomed to her new home and very attached to Libby. Libby certainly realised that it was something she probably should have done earlier but time just got away and there was probably a large part of her that didn’t want to give up this new found family member.

I left before Scott arrived but later on found out that this cat had indeed been a little bit of a traveller – she moved to Australia from New Zealand 3 years ago and is 10 years old. She was looking pretty good for 10; we all had her aged as a young adult around 4-7 years old! She had been stray in Newtown for around a year within which her family had moved to Lilyfield which is where she was now bound.

“BB” (Libby never found out her real name) – we wish you well back in your “new” home. Please don’t stray from home, but if you’re ever in Newtown again, you know you’ll have some friendly faces to visit!